Please welcome Iris Blobel back today! She has a story for us that sounds amazing!

The story is set in Hobart, the capital of Tasmania, the most southern state in Australia. A most beautiful place. I went there a few years back and imagined how it would be to live in this city, how to adapt as a “non-local”, and bit by bit I wrote the story of two sisters moving there.
Obviously, I added a little romance into the story as well – so I added Mark and Zach.
This is the second edition of NEW BEGINNINGS.
The story is now a bit sexier and has also received another edit.
Literary Chanteuse’s review: “This author has a way of endearing her characters and it is easy to fall in love with them. An intriguing story with emotion, love and hope.“
Sharon’s review: “This was a very enjoyable read and it left me wanting just a little bit more. I highly recommend it.“
“Other people have to fight battles in their life as well.”
~~  New Beginnings ~~
(2nd Edition)
by Iris Blobel
AMAZON US: http://amzn.to/2a1BSJ7
AMAZON UK: http://amzn.to/29FTb4B
AMAZON AU: http://amzn.to/2a9yKgW
♥♦♥  SYNOPSIS ♥♦♥
The chance to start life all over with the help of a stranger. 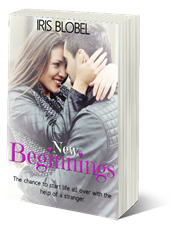 Twenty-two-year-old Sophie Levesque has been guardian to her eight-year-old sister Mia since their mother’s death a few years ago, and it hasn’t been easy. Luck comes their way when they inherit a small house in Hobart. Problem is, though, they don’t know and have never heard of Clara Bellinger, the testator. Settling into their new life, Sophie is still afraid it’s all a mistake.
Mark O’Connor, attorney in Hobart and the bearer of the good news for Sophie and Mia, curses himself for the lack of information about the testator. However, researching the questions gives him an opportunity to see Sophie again, and the more time he spends with the two, the more he realises that his life is missing something. And it’s not his casual lover Linda.
But then there’s Zach, Sophie’s sexy neighbour from across the road… and a very good friend of Clara’s.
Will unravelling the mystery unravel Sophie and Mark’s promise of a future?
♥♦♥ MEET THE AUTHOR ♥♦♥
IRIS BLOBEL
Iris Blobel was born and raised in Germany and only immigrated to Australia in the late 1990s. Having had the travel bug most of her life, Iris spent quite some time living in Scotland, London as well as Canada where she met her husband. Her love for putting her stories onto paper has only emerged recently, but now her laptop is a constant companion.
Iris resides west of Melbourne with her husband and her two beautiful daughters.
Next to her job at a private school, she also presents a German Program at the local Community Radio.
Social Media Links:
Click here to subscribe to Iris’ Newsletter
Facebook: https://www.facebook.com/IrisBlobel
Twitter: https://twitter.com/_iris_b
Goodreads: https://www.goodreads.com/author/show/4067254.Iris_Blobel
Instagram: https:/www.instagram.com/iris_blobel/

Never miss a thing, like over a dozen BONUSES! htt

I can't bring myself to eat them. It's too cute! B

All she wants is to raise her sons to be good men.

Oldest has been swiping my phone in the car to tak